Hit enter to search or ESC to close

HOW DO YOU MEASURE AN EXPERIENCE?

Where? The Star in Frisco

Who? 3,108 sports fans in the Dallas/Ft Worth Area

What? Consumer Retailer and Snack Brand sponsorship activation via interactive gaming at the Star

WHAT DID WE LEARN?

PLAYING INTERACTIVE GAMES
WHAT IF YOU JUST WATCH?

In the ever-escalating battle for fan attention and sponsorship revenue, this is a question you hear more and more from corporate sponsors. In a bid to retain and engage fans, pro teams are pulling out all the stops — from VIP experiences to VR goggles. Gone are the days of passive awareness, of outfield signage and branded Jumbotrons as sponsor activation.

This is the era of experience.

Fans need reasons to get off the couch and come to the game. Those reasons have to be things they can’t get on tv or on the phone. They have to be exciting experiences. Meaningful, shareable, repeatable experiences that convey a sense of community among those who take part.

Sponsors want to know what’s in it for them.

With increased demands for analytics and new incentives for performance, sponsors want a measurable result on their spend. It’s a significant spend. Ad Age reported that sponsors spent $3.5 billion on the four major sports in 2016–17. For the NFL alone, the 2017–18 sponsorship bill ran to $1.5 billion. Sponsors are increasingly deliberate about how and where they spend those billions.

Major sponsors are demanding analytics on the experience economy. What’s their return on your premium fan experience? How do you measure that? How much is a great fan experience worth?

We teamed up with an internationally acclaimed and published PhD in sports sponsorship and marketing to commission the Sponsorship Activation Tracker. This study looks into how fans engage with sponsored interactive gaming experiences at the Dallas Cowboys facility, The Star in Frisco.

The Sponsorship Activation Tracker team measured the Awareness, Consideration and Brand Equity generated for interactive games sponsored by a Consumer Retailer and a Snack Brand at The Star, and then analyzed the data. They compared this with the effects of traditional activation used by an Automotive Brand, Fast Food Brand and Beverage Brand at the same facility. More than 3,000 people from the Dallas/Ft. Worth area took part in this study.

What Did They Have?

Prominent Consumer Retailer and Snack Brands sponsor outdoor interactive motion-tracking games at the Star in Frisco. These games allow visitors to throw, run and jump in NFL-style events. The games are family friendly and challenging for kids and adults. The Sponsorship Tracker calls these “Advergames.”

WHAT DID WE LEARN? 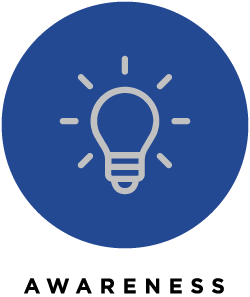 The Consumer Retailer and Snack Brand achieved awareness in excess of 45% for visitors who played the interactive games. 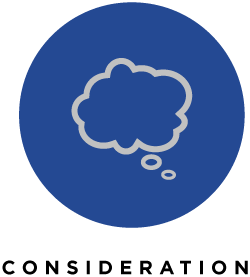 Playing the interactive games moved the needle by an average of 19 percentage points across the Consumer Retailer and Snack Brand when it came to brand consideration, meaning those surveyed are more likely to purchase from those brands in the future.

Just watching someone else play also has a significant effect. Those surveyed showed an average of 15 percentage-point-increase in consideration. And, with 55% of the visitors to the Star reporting that they watch these interactive games, that’s a significant potential boost to sponsor sales. 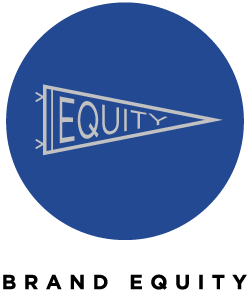 We examined the Brand Equity effect on three brands at the Star — an Automotive Brand, a Beverage Brand and the Snack Brand. All three are naming sponsors, with only the Snack Brand to sponsor an interactive game.

Here’s what we saw in Brand Equity lift for participants who visited the Star vs. those who hadn’t:

The Right Kind of Distinct

The C-D (Centrality-Distinctiveness) Map is a strategic tool recommended in the Harvard Business Review. It spreads the brand attributes of Aspirational, Mainstream, Unconventional and Peripheral across a quadrant. 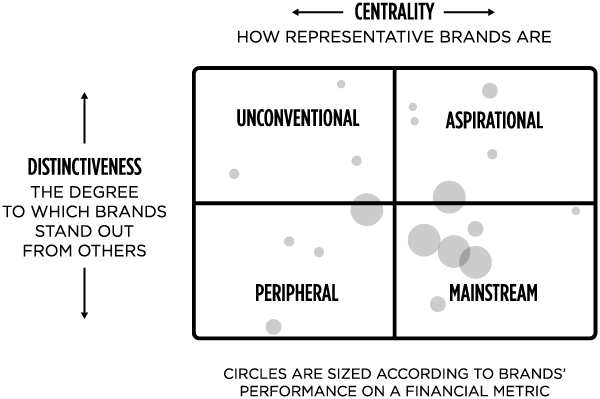 This tool maps where customers rank brands on Centrality (how representative of their industry they are) and Distinctiveness (how they stand out from competition).

After applying a C-D Map to the Sponsorship Tracker respondents, we learned that the use of effective sponsored interactive games at the star significantly repositioned the sponsor’s brand in the customer’s mind. The mainstream brand was seen to be more central to its industry and made competitors negatively distinctive (it’s important for mainstream brands not to appear too distinctive and thus… not mainstream).

It all comes down to team/sponsor fit, and where the two personalities intersect.

How Can it Help You?

Dig into your marketing and advertising research. Measure your brand personality traits. Target your strengths that appeal to both fans and sponsors.

4. Where the Fit Hits the Fans

Find the intersections where your brand, your sponsors’ needs and your fans’ interests intersect. This is where meaningful experiences are made. 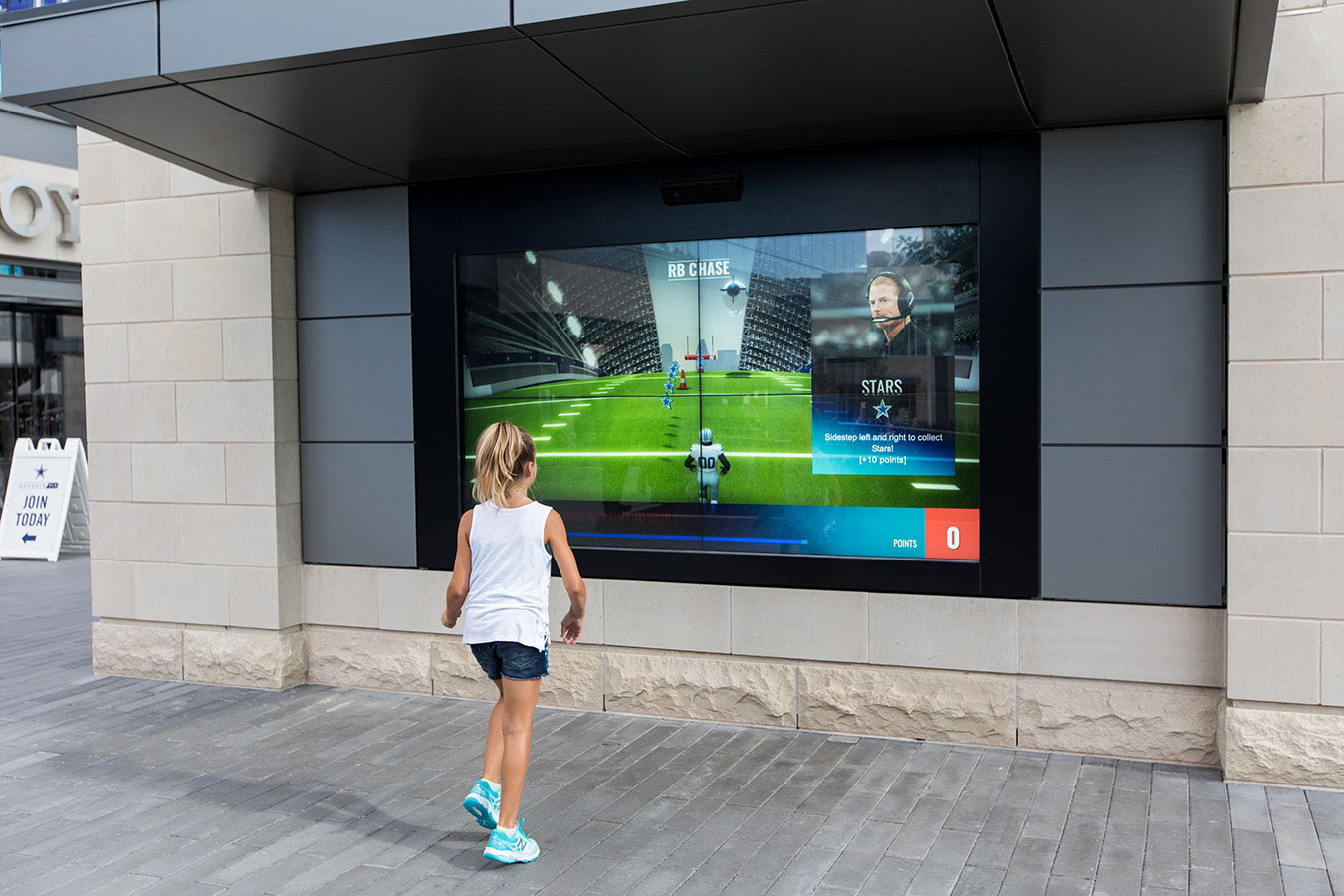 Example: Dr Pepper Ring of Honor at The Star

Value Intersection: Fans interact with one-of-a-kind Cowboys greats through Dr Pepper’s brand promise “One of a Kind.”
Engagement: A social media-friendly moment through a static display and an app allows visitors to take a picture with a virtual likeness of a Cowboys great … along with a Dr Pepper tag.
The Next Step: Retail tenants pay a premium to be near the one-of-a-kind experience.

The right fit will effectively convey the brand personality traits of your brand to your sponsor. When a visitor sees the fit to be strong, the bond between the team and the sponsor grows greater in their mind.

This is a major revenue issue in today’s pro sports market, but we recognize that it’s just one of many issues that you face daily. Sponsor activation sits soundly in our wheelhouse.

These are the kinds of experiences we exist to create, and that we’ve already created with the Dallas Cowboys, Oklahoma City Thunder and the Tennessee Titans.

Together, we can make the most of your sponsor relationships and your fan passions. Let’s create activation experiences that are profitable, and that keeps fans coming back for more.